Those of you who are in the Memphis area can listen to The Political Cesspool on WLRM 1380 AM from 4-7 PM CENTRAL (5-8 EASTERN) – Sunday afternoons. Be sure to visit their website and sign up for their email news, commentary and show information. See especially his blog!

More important to us, we can LISTEN to the program and its archives via Internet Streaming. Look up "The Political Cesspool" on Yahoo.com then hit the link provided to their website. Or you can go directly to their website and use the Click Here to listen to the Political Cesspool live over the Internet! link box from his web page. Note: If you go to the program streaming link early - BE SURE TO REFRESH YOUR BROWSER TO SEE THE STREAMING SPEAKER ICON! Also, you must have the latest, updated copy of Windows Media Player and files to connect to this streaming file type. DIVE IN!!!

I was one of the first guests on that show, and we ran for a highly successful two-hour program.

The founder of program, whom I met, is James Edwards. James was a 24-year-old bundle of energy and dedication who is deeply concerned about the genocide against the white race which is going on and says so. He is also wiser than many of the older members of our movement.

Many older pro-whites insist that we live in a authoritarian society, but they don't know how to handle it. James does. He sticks with legitimate complaints that white gentiles have and our fear of the genocide of immigration and intermarriage that respectable conservatives all advocate. He does not need people trying to get him off on denouncing Jews or blacks or anybody else.

"The Political Cesspool" is one of the first major steps toward making our perfectly legitimate and generally felt concerns, the ones that are presently denounced as Heresy, Racism, and Hate, the mainstream. That is what the program needs help with.

WLRM 1380 AM has an FCC license. Keep that in mind when you call in.

My 1976 book, A Plague On Both Your Houses, was praised by the Publishers' Weekly, Kirkus, and even recommended for purchase by the Library Journal, though all of them hated my politics and said so. I specifically voiced my concern in that book about the disappearance of the white race, but I did it right.

My book was a description of populism as I saw it. That is the way it was described by National Review, the Conservative Digest and many other publications.

It turns out that "The Political Cesspool" describes itself as "The South's Foremost Populist Radio Program."

My book was published before James Edwards was born, but this is not a coincidence. James has seen what I saw, the simple fact that our concerns ARE mainline American concerns. They represent populism in an authoritarian society. 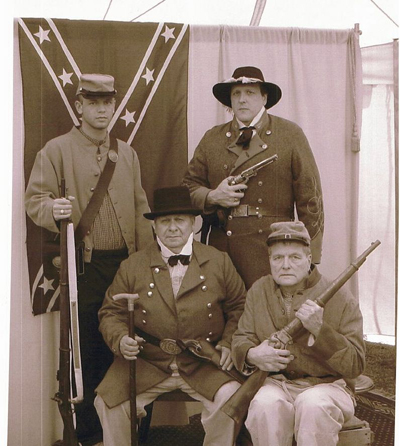 HEADS UP!! ALL YOU SOUTH CAROLINA READERS


Or hop in your car and head out to visit one of Bob's favorite places.
Tell them you read about it here!
Bob's books, Why Johnny Can't Think: America's Professor-Priesthood, are now in Maurice Bessinger's Piggy Park Restaurants around South Carolina.

Bob had trouble finding a publisher with the guts to publish his book, but Joe Sobran had the courage to endorse it. Joe has written an enthusiastic -- and humorous -- Foreword for Why Johnny Can't Think.

YOU CAN make a difference. It's past time to just read. We need you to ENLIST!

In every army, the sergeants are the ones who make the rubber meet the road. Everything is just paperwork until the sergeants get hold of it.

I doubt that there has ever been a serious army that didn't have more generals than it needed.

But every army always has a desperate lack of sergeants.

Sergeants are the backbone of every army, and not just the less important armies that wear uniforms. When you have to get the military into action, the more important armies have failed. War is hideously expensive in every way, and every war is a direct result of the failure of the thinkers and doers who should have prevented it. Those are the far more important armies.

I desperately need sergeants for my book, Why Johnny Can't Think.

In the important armies, you say, "We need to get the book out." You do not have to tell the sergeants that they need to read the book, then put quotes for it news groups, contact their friends, find contacts.

People keep asking me what they can do. I say, "Please look at readbob.com"

I repeat: in the important armies, you say, "We need to get the book out." You do not have to tell the sergeants that they need to read the book, then put quotes for it news groups, contact their friends, find contacts.

But we need sergeants!

No officer tells the sergeant, "Now you go out and get your men together and you tell them to get their guns." That is what they do. They know how to do that better than I do.

Are there any sergeants out there?

We have archived WOL weekly articles dating back to the beginning of WOL (some were lost), to this site, where they will permanently reside.

If Hitler Hated Jews, Then all of our National Spokesmen Hate Whites

Can You Hate Your Race and Love Your Country?

I’m Too Bigoted to be Anti-Semitic


If you Missed April 12th's World View it's here:

The Curse of Union

"Tribe" is the Liberal Word for "Nigger"

The United Nations is the Enemy of Nations


and April 5th's World View was:

Political Correctness
IS
a religion.